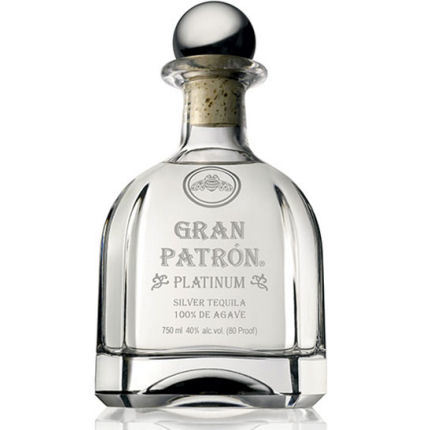 Discover the popular Gran Patron Platinum and have it delivered to your door today.

About the Producer: Tequila Patron

Patrón is one of the best-selling premium tequila brands in the United States. It started as the Siete Leguas Tequila brand and was produced at its factory in Jalisco, Mexico. In 1989, the rights were sold to St. Marteen brandies, but distillation continued at Siete Leguas. The success of the Patrón brand led St. Marteen Spirits to change its name to Patrón Spirits Company. Tequila's popularity grew in the 1990s and spread to other markets, and is now widespread around the world. In the early 2000s, Patron began reimagining the brand as a premium alcoholic beverage that wasn't always associated with tequila at the time. He introduced new varieties at different prices, started individual bottle numbering and, in 2002, transferred all production to an independent specialized distillery in Atotonilco el Alto. Some of the most expensive bottles in the Patrón catalog are the barrel-aged Añejo Tequilas bottles, seen for years in American and French oak. Gran Patrón Burdeos is specially finished in Brodeaux barrels after several years of aging in oak. The distillery also uses a traditional stone tachymeter wheel to crush some of the agave and released its Roca Patrón label with this process. Patron recently launched the Know Your NOM tool, which allows users to search for a NOM (Norma Oficial Mexicana) number. your beloved Tequilas. Know Your NOM highlights which distilleries make tequila, with the vast majority of brands sharing manufacturing space. Patrón also uses it to advertise his distillery and therefore his individual OWL.