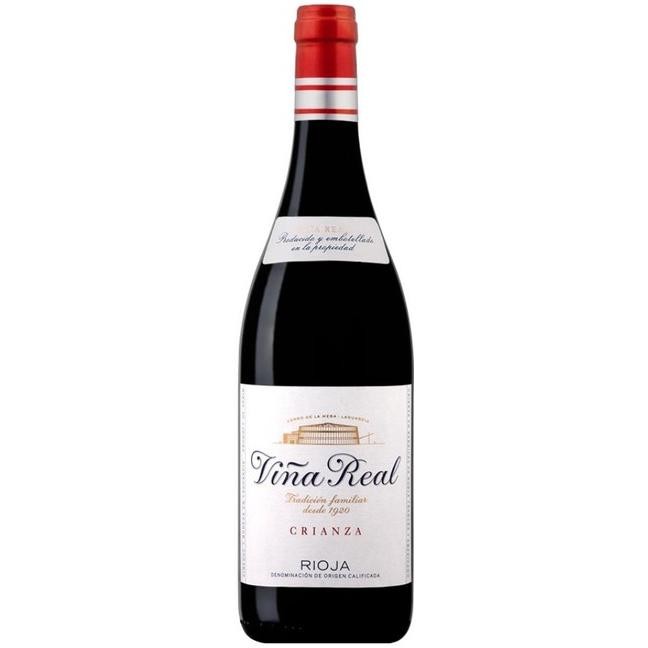 Dry red wine Vina Real, Crianza, 2012 is made ​​primarily from the Tempranillo grape variety grown in the region of Rioja Alavesa, with the addition of a small amount of Masuelo varieties, Grenache and Graciano. The climate is influenced by the Atlantic Ocean, clay and limestone soils, rich in iron and many other trace elements, creating particularly favorable conditions for ripening the grape Tempranillo, which is the hallmark of Spain.

About the Producer: Vina Real

Viña Real is a Spanish winery subsidiary of the Rioja wine producer Compañia Vinicola del Norte España (CVNE). It is best known for its reds with a predominance of tempranillo, as well as white Viura wines aged in barrels and rosés. It appeared in 1920 as a pressure wine from Elciego vineyards in a vineyard, although the exact location of the original vineyard area. since then it has been forgotten. It has its own winery, independent of CVNE, as is the case with two other CVNE brands, Imperial and Contino. The Viña Real winery is made up of three buildings, the main part of which is built in red cedar, following the fermentation vat model. Viña Real is located in Laguardia in Rioja Alavesa and produces red wines at the Crianza, Reserva and Gran Reserva levels. Highest quality and smallest products. The winery also produces a limited production of the Tempranillo variety aged in French oak barrels called Pagos de Viña Real. This wine is recognized for its slanted Bordeaux bottles, not the high-rim Bordeaux bottles used by CVNE and, in fact, by most wines in the region.