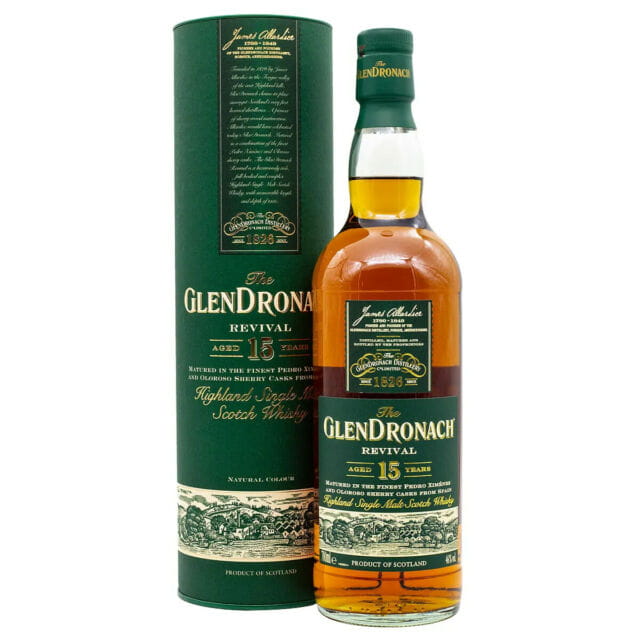 Revival is a rich, intense whiskey that showcases the style of sherry for which Glendronach is famous. That phrase laid the foundation for Glendronach’s current rise, and his seasoned sherry dramas are now mentioned with the same awe as the rest of Speyside’s heavyweights. A must for sherry whiskey fans.

About the Producer: Glendronach Distillery

Glendronach is a historically significant and beloved single malt whiskey, produced in the village of Forge, near Huntley, in Aberdeenshire, in the Highlands of Scotland. The original mansion, Glen House, was built in 1771 and a distillery was added in 1826. The distillery changed hands several times before coming under the control of Teacher and Sons, the producers of the popular blend, in 1960. Glendronach's products were an important part of the production. The professor's blend for the next four decades until the plant was shut down in 1996. It was reopened by Allied Distillers in 2001 and taken over by Pernod-Ricard's Chivas Brothers division in 2006, and then purchased by BenRiach Distillery. In 2008. The Benriach The Group, including the Glendronach and Glengassaugh distilleries, was acquired by Brown-Forman Corporation in 2016. The distillery produces five main distilleries, each with varying levels of aging in sherry casks, as well as a range of finishes in wood and limited editions. Whiskeys are popular with critics and collectors and can be purchased at auction for a high price.