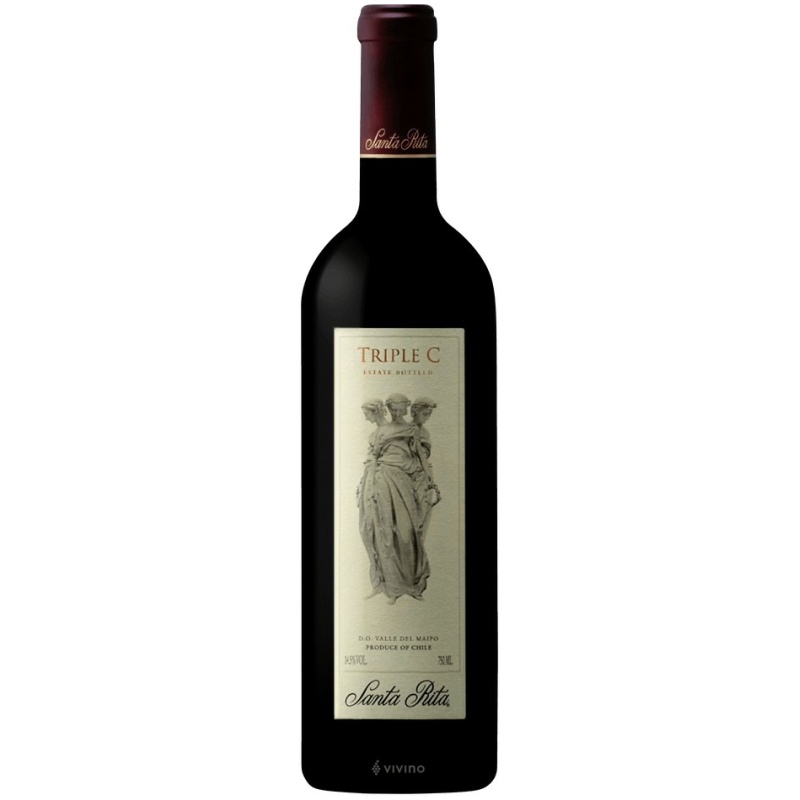 Santa Rita Triple C is a deep ruby red. The delicate nose has intense aromas of black cherry and dark chocolate with notes of cedar and tobacco, and the tannins are firm and intense. It is a concentrated wine, elegant, complex and balanced, with good structure and sufficient depth to age well for many years.

Heritage and enterprise are the marks of Santa Rita, one of the main wine properties in Chile. Founded in 1880 by Domingo Fernandez in the Maipo Valley in Chile, this historic property was one of the first pioneering plantations of European grape varieties in Chile.

In 1980 it was acquired by its current owner Ricardo Claro, under which Santa Rita reaped the benefits of continued investment, leading to a period of impressive growth during which the winery cemented its position at the forefront of Chile’s most successful and innovative properties. Initiatives include the highly successful launch of the Santa Rita 120 wine series and a series of ultra-premium wines, including the highly acclaimed Casa Real and Santa Rita Triple C. A wide range of improvements include the purchase of new vineyards, top quality clone plantings, improved trellising and irrigation, balanced viticulture, limited yields, subsequent harvesting, individual block farming, small lot winemaking, and a greater focus on sustainable agriculture.

Chile produces world-class Bordeaux blends that can compete with the best in the world. These Merlot and Cabernet Sauvignon wines are full of structure, tannin and body, just like their Bordeaux and Napa counterparts. However, winegrowers here tend to focus more on creativity and innovation in the production of their blends.

92
James Suckling
Santa Rita Triple C has a rich array of redcurrants and brambleberries with a cassis thread that turns to blackberry pastilles on the palate, delivering a plush, smooth finish. A blend of 65 per cent cabernet franc, 30 per cent cabernet sauvignon and five per cent carmenere. Drink in 2024.
92
Wine Spectator
Mouthwatering flavors of dark cherry, kirsch and plum tart are loaded with Asian spice accents. The creamy finish is ripe and rich, with dark chocolate and mocha notes. Cabernet Franc, Cabernet Sauvignon and Carménère. Drink now through 2025.
91
Vinous
Santa Rita Triple C is a blend of Cabernet Franc (65%), Sauvignon (30%) and Carm?n?re (5%), all from Maipo Alto, a sunny area with alluvial soils. Maroon with a hint of brick, it offers black olive, oak and tar notes over a bed of herbs and raspberry and blueberry jam. Sugary on the palate, it presents firm tannins and good volume, body and heft. A quintessentially Chilean wine.