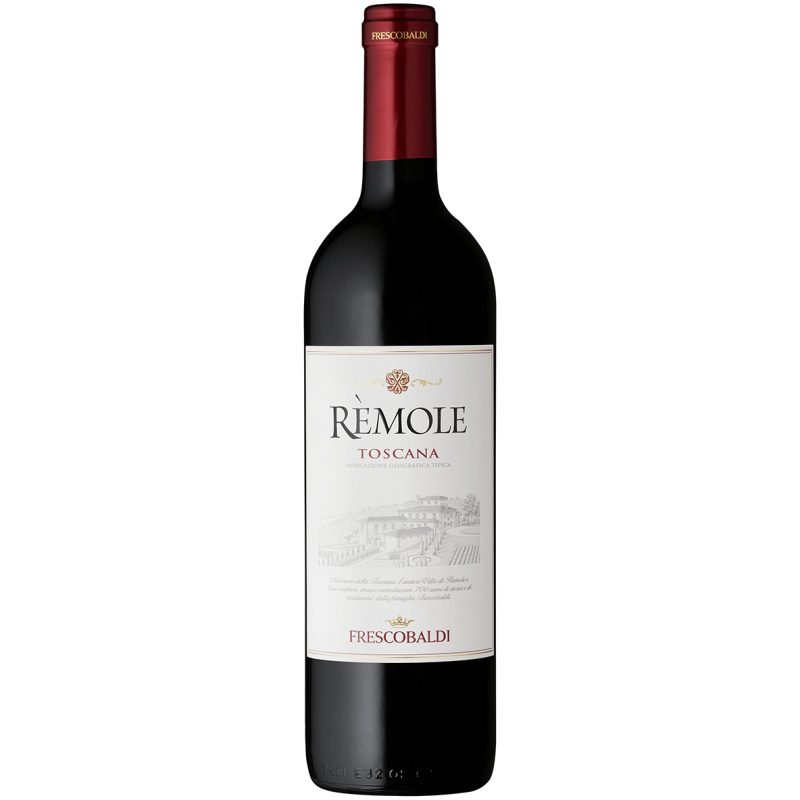 Frescobaldi embodies the essence of Tuscany, its extraordinary vocation for viticulture and the diversity of its territories. The remolisme of Rosso boasts a bright and intense purple-red color. Fruit aromas such as blackcurrant, raspberry and black cherry slowly give way to extremely delicate spicy notes. On the palate, the warm note is miraculously balanced with a fresh vivacity. This pleasant wine combines elegance and balance with great smoothness.

The history of Frescobaldi is closely linked to that of Tuscany. At the top of medieval Florence, Frescobaldi spread their influence as bankers, becoming patrons of great works in Florence, such as the Ponte de Santa Trinita and the Basilica of Santo Spirito.

Frescobaldi embodies the essence of Tuscany, its extraordinary vocation for viticulture and the diversity of its territories.

The uniqueness of Frescobaldi is that it represents the diversity of Tuscany, its properties and its wines, expressing a kaleidoscope of aromas and sensations derived from the peculiarities of each individual terroir. The properties are located in the best areas of Tuscany and each one tells its own story, composed by nature, terroir and people.

About the Producer: Marchesi de Frescobaldi

Marchesi de 'Frescobaldi is a historic Italian wine producer located in Tuscany. It has several properties spread throughout the region, including the DOC and DOCG zones of Chianti Rufina, Montalcino, Pomino, Colli Fiorentini and Maremma. Frescobaldi produces a wide variety of wines. From the iconic regional Sangiovese grape variety to more international grape varieties like Chardonnay in a wide variety of styles. Frescobaldi's history dates back to the early 1300s, when the family began producing wine in Tenuta di Castigliona, southwest of Florence. He became famous in the 1400s for supplying wines to Renaissance artists like Donatello, and Frescobaldi wines were served to the papal court and the English court of King Henry VIII. Frescobaldi now manages seven properties across Tuscany: Castello di Nipozzano, Castello di Pomino, Rèmole, Tenuta Perano, Tenuta di Castelgiocondo, Tenuta di Castiglioni and Tenuta dell'Ammiraglia. properties. Located in the mountainous part of the region, overlooking the Arno River, Cabernet Sauvignon, Merlot, Cabernet Franc and Petit Verdot are grown from it, resulting in a super Tuscan wine called Moromoreto. This property also supplies Frescobaldi with its Chianti Rufina wines. The Castelgiocondo unit in Montalcino has been producing Frescobaldi Brunello di Montalcino wines since the 19th century. In addition, Frescobaldi explored alternative terroirs. Castello di Pomino is located in the Apennine Mountains east of Florence and produces wine from some of the highest vineyards in Tuscany. More recently, Frescobaldi began collaborating with prison authorities on the island of Gorgonas, creating a mixture of Vermentino and Ansonica with the help of local prisoners.