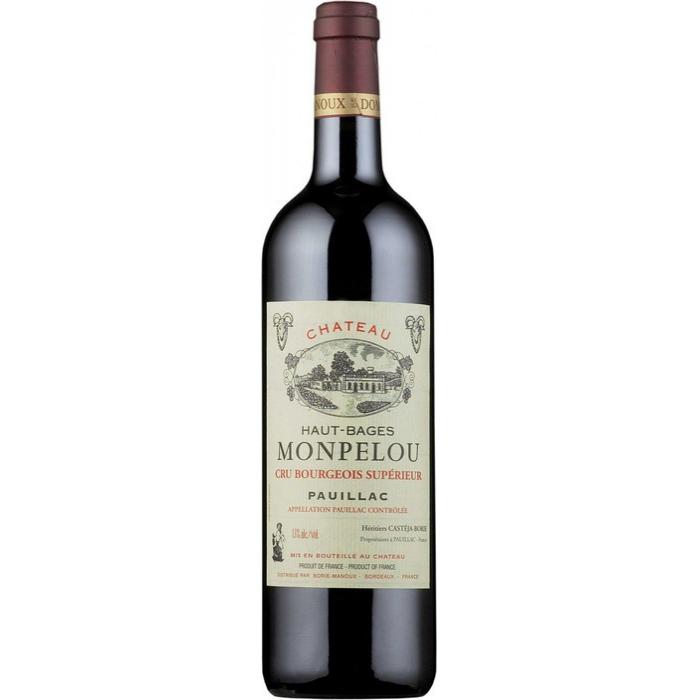 Estate Chateau Haut-Bages Monpelou class Cru Bourgeois is situated in the heart of the commune Pauillac. Starting from the XVI century, the manor was part of the Chateau Duhar-Millon, belonging to the family Kastezha. In 1937, the situation with numerous heirs forced to put Douar-Milon for sale. For a short time, the estate has changed several owners. In 1948, from the Chateau Douar-Milon was separated 15 hectares and sold Marcel Borie, who owned Chateau Batailley. Since that time, Chateau Haut-Bages Montpellier became a separate winery. Heiress Marseille – daughter Denise was the wife of Emil Kastezha, a representative of the family of the first owners of Douar-Milon. Therefore, at this time, Chateau Haut-Bages Montpellier, along with more than 10 estates of Bordeaux, belongs to the family production and trade group Borie-Manoux, which is headed by the son of Emil and Denise, Philip Kastezha.

Chateau Haut-Bages Montpellier called “younger brother” Chateau Bataille, as the process of winemaking in the estate passes to the use of equipment and managed by professionals Chateau Bataille. In the care of the vineyards used technology to be natural. Collecting and sorting the berries are done manually. Fermentation takes place in the harvest tank made of stainless steel. The traditional process of maturing the wine in oak barrels lasts about a year.

“Bori-Manu” – one of the largest family-owned companies in the production of wine in France. Established in 1870, at first it was called “Eugene Borie Freres”, since she owned Bori brothers. After World War II, the brothers Marcel and Francois were divided. Marseille became the leader of the economy, whose headquarters is located in Bordeaux, and called it “Borie-Manoux”. Today, the company “Borie-Manoux” deals not only production, but also the sale and distribution of its wines both in France and around the world. The property is the current owner of the family business Philippe Casteja is about 250 hectares of vineyards located in the best areas of the Bordeaux region – O-Médoc, Saint-Estephe, Pomerol, Saint-Emilion, Pauillac. Economy “Borie-Manoux” offers a wide selection of wines – high-quality table wines, wines of Grand Cru Class from its own vineyards and wines of Bordeaux small castles.

About the Producer: Chateau Latour

Chateau Latour is one of the most famous wine producers in Bordeaux and the world. It is located in the southeast corner of Pauillac, on the Saint-Julien border, in the Medoc region. Ranked first in the Bordeaux ranking of 1855, it has become one of the most sought after and expensive winemakers on the planet, producing strong, structured Cabernet Sauvignon-dominated wines that can last for many decades. 1331, with fort and garrison to guard the estuary. Several small domestic plots began to grow grapes, and the wine from this place was recognized by Montaigne as early as the 16th century. The original tower no longer exists; the famous tower depicted on the label was designed as a dovecote and was built around 1620. The development of Latour as a single property came with the beginning of a long continuous period of family ownership, based on the name of Segur, also associated with Mouton and Calon-Insurance It all started in 1670 and lasted 290 years, although after the French Revolution Latour was divided and fully reunified only in 1841. The castle is currently owned by François Pinault and is part of his Groupe Artemis. As a rule, Cabernet Sauvignon dominates in this region. in the vineyard, responsible for about 80 percent of the plantations. Merlot makes up most of the rest, and there are also small amounts of Cabernet Franc and Petit Verdot. The Grand Vine is produced only in the vineyards surrounding the castle and is presented on the 1759 plant. Latour produces two other wines, Les Forts de Latour and Pauillac de Latour, both made with younger wines.

Be the first to review “Pauillac Bordeaux 750ml” Cancel reply
Get this product Pickup available at 5790 Broadway, Bronx, NY 10463
Get this item delivered via FedEx. Learn more.