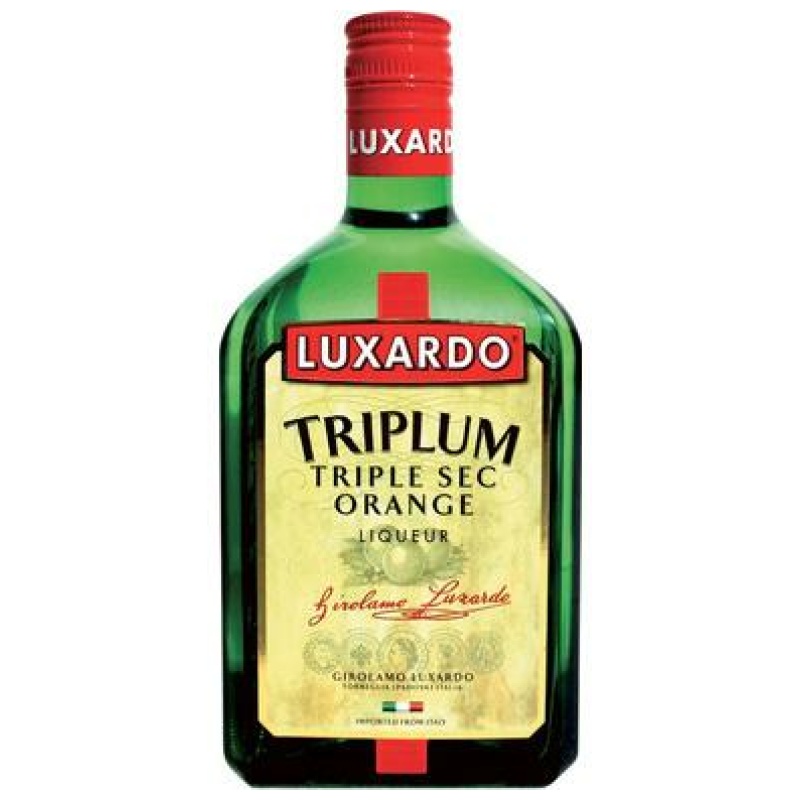 “Triplum” Triple Sec Orange – the classic “triple dry” liqueur produced Luxardo prescription that does not change from the first half of the XIX century. The name “triple sec” associated with the traditions of names of liqueurs in the XIX century. Liquor produced by distillation of the fermentation product of dry crusts of three kinds of citrus fruits: mostly Curacao (bitter oranges from the Dutch Antilles; cultivar is named after one of the islands), sweet oranges and tangerines “Triplum” made ​​from rectified the above three kinds of citrus, cutting off “the head. “and” tail “in the production process. Only the “heart”, that is, central and best part of the distillate is fed to a secondary distillation. The resulting orange alcohol supplemented with highly refined tincture dry orange flowers, extract of mint and marsh marigolds and other components that Luxardo masters kept secret. As a result of the mixed doubles liquor becomes complex, refined fragrance. Then the distillate is filtered, diluted with softened water to the desired strength and 39% sugar syrup is added.

“Triplum” – one of the few liqueurs companies obtained by distillation. Liquor comes in a patent protected dark green bottle square shape with rounded edges. In 2011, the liqueur was awarded a silver medal at the competition “WSWA Tasting Competition”, held in San Francisco. In the same year he won the double gold medal and the title of “Best Fruit liquor” in the competition “World Wine and Spirits Competition”.

Luxardo has a very interesting history. It was founded in the port town of Zara on the Dalmatian coast in 1821. Until 1797 the town was part of the Venetian Republic, and then became the capital of the Kingdom of Dalmatia, under Austrian sovereignty. In 1817, in the Kingdom of Sardinia consulate in Zara was sent to a citizen of Genoa Girolamo Lyuksardi. His wife was fond of home production of liqueurs. She is very interested in improving the “liqueur Maraschino” liqueur that is produced in Dalmatia since the Middle Ages, and is often done in the monasteries. As a result, she made liquor of such high quality that it has come to the liking of not only family and friends but serious connoisseurs. Then in 1821, Girolamo founded a distillery for the production of Maraschino. After 8 years of research and product improvement, the plant received an exclusive “privilege” from the Emperor of Austria, is a “high-level” confirmed the quality of the liquor, and the company continues today proudly carry the title of “Privilegiata Fabbrica Maraschino Excelsior”.

In 1913, the third generation of the family – Michelangelo Luxardo built a modern distillery, one of the largest in the entire Austro-Hungarian Empire. Until now, Zara kept this impressive building. At the end of the First World War Zar it was incorporated into the Kingdom of Italy, and the company became the most important Luxardo distillery in the country. During World War II after the bombing of the factory was almost completely destroyed, as well as the city. In late 1944, German forces withdrew from Dalmatia, but was followed by the occupation of the Tito regime. The vast majority of the survivors of the Italian population went into exile in other countries, but many were killed: among them – the fourth generation of family Luxardo. After more than a century of activity, the company Luxardo was destined to disappear. The only survivor of the brothers was Luxardo Giorgio. He had the courage and vision to restore the factory in the Veneto region in the town of torreglia (Padua). So a new chapter in the ongoing story of the family was discovered.

Luxardo is now the number one selling white and black Sambuca, which is appreciated and loved the bartenders all countries. CEO – Guido Luxardo is president of Italian Spirits Association. Liqueurs Luxardo – the only Italian liqueurs, high production quality and environmental standards which are certified by the British Retail Consortium.