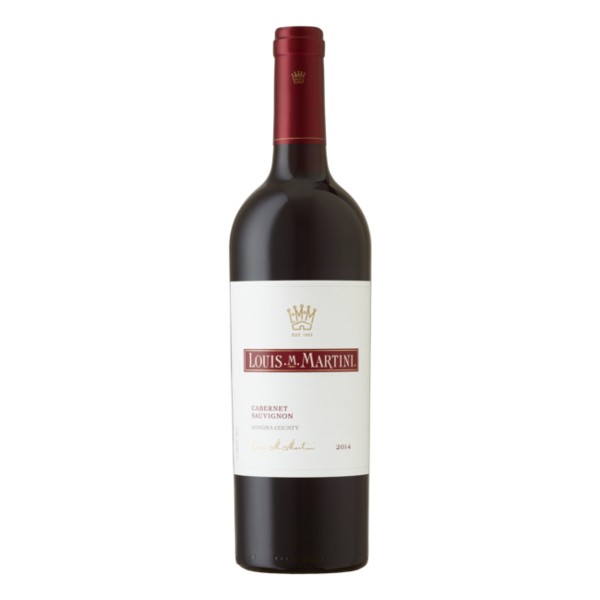 Louis M. Martini Sonoma County Cabernet Sauvignon wine reflects the best of the hot, narrow Dry Creek Valley and the warm, wind-cooled Alexandra Valley. Together, these unique properties create a rich, perfectly balanced Cabernet Sauvignon with abundant yet smooth tannins. These tannins make the young wine accessible, but give it enough texture to mature elegantly. This crop had a long, quiet growing season, which helped to create a rich, concentrated flavor that included wild berries, plums, licorice and mocha. The full-bodied and enveloping mouthfeel results in a long and delicate finish with intense fruit tones, dry herbs and cedar wood in a firm structure.

Louis M. Martini Winery is a wine producer in the Napa Valley, founded in 1933 in the territory of what is now Santa Helena AVA. It mainly produces red wine, the most famous of which is Cabernet Sauvignon, responsible for most of the production. The current range is complemented by Cabernet Sauvignon Lot 1, made from the finest blocks from the main Napa Valley vineyards. Aged for 19 months in French oak barrels, 80% new wood. The newly introduced Crown Cabernet collection is a group of Cabernet Sauvignon mountain vineyards. They are for a single location other than the Howell Mountain bottling. The conditions for aging in barrels vary over time and depending on whether the component is aged in American or French oak. The Monte Rosso Cabernet Sauvignon vineyard belongs to this group. Other wines from the same place have their own Monte Rosso collection. Single varietal wines are made from Cabernet Franc, Zinfandel and Malbec. Monte Rosso Vineyard Mountain Red is based on Syrah, complemented by other southern French varieties such as Petite Sirah (Durif) and Grenache. The Cellar 254 small batch line includes Cabernet Sauvignon Rosé, Vartovoe Petit Syrah and Meritage (Bordeaux style blend) with approximately 60% Cabernet Sauvignon and 20% Malbec. The core of Branded Cabernet is bottling in Sonoma, Alexander Valley and Napa Valley counties. The only white wine is the Sauvignon Blanc from the Napa Valley. History Louis Martini produced and sold wine during Prohibition for sacred and medicinal purposes through his company LM Martini Grape Products. When Wolsted's Law was repealed in 1933, Louis M. Martini Winery was founded and became one of the first five wineries established in Napa after Prohibition. In 1938, Martini expanded to Sonoma County with the Monte Rosso vineyard, named after the region's red volcanic soils. Luis M. Martini's long history in Napa Valley has given him a significant impact on the region's wine industry. In 1943, Martini helped found the Napa Valley Winemaking Association. His son, Louis P. Martini, was an innovator, helping to introduce techniques such as the use of wind turbines to prevent freezing, temperature-controlled fermentation, and individual batch selection. As part of its legacy, the Louis P. Martini Foundation for Viticulture and Wine Research was established at the University of California, Davis. In 2002, the winery was acquired by E. & J. Gallo.