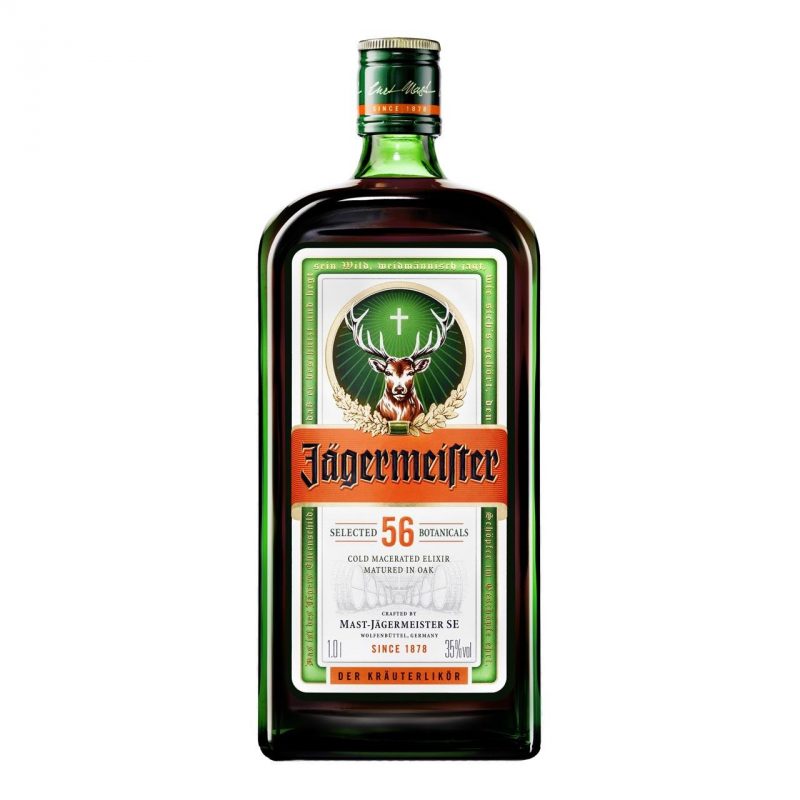 Jagermeister 750ml Liqueur’s 56 botanical components make a strong and balanced shot that is best served ice-cold. The original Jagermeister formula was developed in Wolfenbüttel, Germany, in 1878 and has remained constant ever since, maturing in nearly 100-year-old German oak barrels. A bottle of Jagermeister should be kept in the freezer to be consumed at the perfect temperature, according to connoisseurs. It’s usually used as a digestive aid after dinner, but it’s also a popular cocktail ingredient. This bottle has a capacity of 750ml.

Taste: The flavor is bittersweet. The primary flavor is anise, just as the fragrance. This drink has a spicy and earthy flavor that adds heat and sweetness. This liqueur tastes best when served chilled or over ice. The Jäger bomb, which is produced by mixing a shot of Jager with a short glass of Red Bull, is the most popular cocktail made with Jägermesiter.

Every masterwork by a German artist combines precision and inspiration in equal measure. This Jagermeister 750ml herbal liqueur is bold, but not overwhelming.

Curt Mast, Wilhelm Mast’s son, steered the family vinegar business in a new path. It took him a few years to master Jägermeister’s 56 botanical ingredients mix, but the wait was well worth it. He refined the liqueur in Wolfenbüttel, a Lower Saxon town steeped in history and art, surrounded by nature, and just a short distance from Berlin. Like the drink it inspired, it was a combination of all the best elements.

The distinctive emblem of Jägermeister is inspired by the story of Saint Hubertus. Hubertus had a vision of a big stag with a bright cross between its antlers when he was a wild huntsman. The vision changed him, and he later advocated for more environmental stewardship, eventually being recognized as the patron saint of hunters. Curt Mast saw this powerful story as a wonderful fit for his powerful elixir, so he selected the stag as his insignia in honor of the actual ‘Hunting Master.’

Liqueurs are distilled spirits that have been mixed with flavoring additives. They were first created by 13th century Italian monks as herbal cures and elixirs. A variety of herbs, spices, nuts, fruits, and flowers can be utilized, as well as a sweetener like sugar or corn syrup. While most examples are sweet, some are herbaceous or sour, and match well with desserts or make for a lovely addition to drinks.

89
Wine Enthusiast
This nut-brown Jagermeister 750ml liqueur, known best as a college shooter, has a sophisticated side, too. Look for a root-like nose that hints at sarsaparilla and a spiced, warming palate that suggests cinnamon, gingerbread, molasses and clove.

About the Producer: Jägermeister

Wilhelm Mast worked as a vinegar producer and wine seller in Wolfenbüttel, Germany. Curt Mast (1897–1970), his son, was a lifelong enthusiast for the creation of spirits and liqueurs, and was eager to assist his father in the business from an early age. Curt developed the recipe for "Jägermeister" in 1934, when he was 37 years old and had taken over his father's business. Curt was a voracious hunter. Jägermeister translates to "Master Hunter," "Hunt Master," or "Master of the Hunt" in German. It is the title of a high-ranking officer in charge of hunting and gamekeeping affairs. Jägermeister was a job title that has been around for centuries. The new Reichsjagdgesetz (Reich Hunting Law) of 1934 re-defines the term, allowing senior foresters, game wardens, and gamekeepers in the German civil service to use it. When the new hunting law was enacted, Hermann Göring was appointed Reichsjägermeister (Reich Hunting Master). When Jägermeister was first introduced in 1935, Germans were already familiar with the brand, which they referred to as "Göring-Schnaps." Sidney Frank (1919–2006), who managed an American liquor importing company, was instrumental in bringing Jägermeister to a wider international audience. From the 1980s, he advertised the drink as a party drink to the youth and student market - a quite different niche than its previous conservative brand position in its native German market. A market research firm described him as "a promotional genius" for creating "an unpronounceable liqueur...drunk by elderly, blue-collar Germans as an after-dinner digestive aid... associated with 'party,'" according to New York magazine. Sidney Frank Importing was eventually purchased by Mast-Jägermeister in 2015.