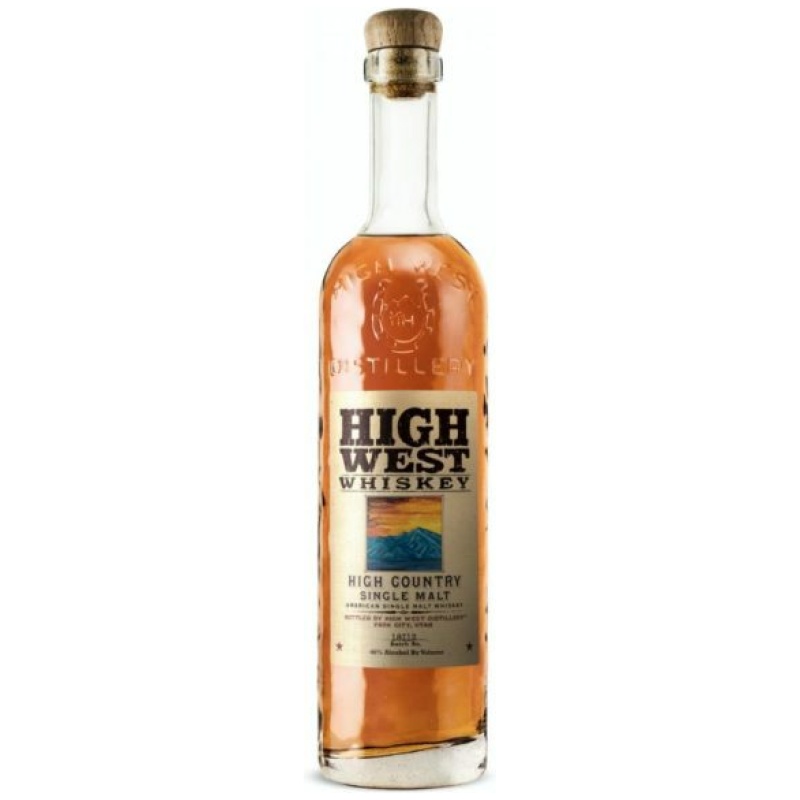 Get this High West High Country delivered to your door. A blend of 100 percent copper pot-distilled malt whiskeys, High West High Country American Single Malt Whiskey is only available in extremely restricted quantities and is kept a closely guarded secret. This artisan whiskey is an homage to the renowned single malts of Scotland. At the same time, it is a truly American single malt whiskey that captures the pioneering spirit of the American West. The distillate used to manufacture this whiskey comes entirely from High West’s own production. This High West single malt whiskey is not chill filtered and is distilled on the grain to give it a powerful, western personality. It is produced high in the Wasatch mountains in Park City, Utah, which is in the state of Utah. This spirit, which has a naturally caramel color and no added flavors or coloring, is aged for a minimum of two years in new and used charred American white oak barrels before being finished in French oak port and oloroso sherry barrels, which add to its distinctive character and contribute to its overall complexity. This American whiskey has flavors of vanilla-glazed banana bread, warm granola with dried fruit, and frangipane tart, and it has aromas of baked apple, honey drizzled over fresh fig, lavender, graham crackers, overnight oat groats with peaches and cream, dried white daisies, cinnamon stick, and tobacco. In addition, this whiskey has aromas of dried white daisies. The most noteworthy characteristics of this High West Whiskey are its upfront powerful flavors of fresh apricots, toasted marshmallow, and roasted walnuts, which are then followed on the finish by honeycomb, sourdough toast, and a trace of smoked lemon peel. You can sip this whiskey straight from the barrel, with just a few drops of water added, or you can include it into your favorite whiskey cocktails. Choose High West to indulge in a flavorful craft whiskey that is crafted with the pioneering spirit, and remember to drink responsibly. 2021 Park City, Utah’s High West Distillery is where you’ll find me.