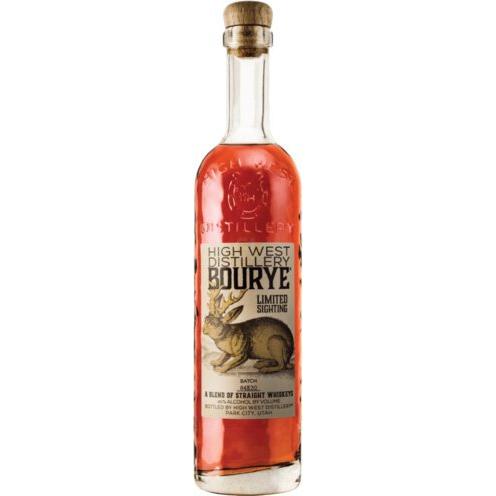 High West Distillery, founded in 1879, was Utah’s first distillery. High West Bourye Whiskey is a 92-proof combination of rich bourbon and rye whiskeys that makes for an excellent sipping whiskey. All of the whiskeys in this meticulously constructed blend are at least ten years old and come from a variety of distilleries. With a lengthy and deep finish, the flavor tastes like sweet honey nougat, creamy caramel, dark ginger cake, mulling spices, and dried cherries.

About the Producer: High West

David Perkins and his wife Jane started High West Distillery in 2006. After taking a distillery tour and witnessing the parallels between the fermentation and distilling processes and his own work in biochemistry, David, a former biochemist, was inspired to build his own distillery. David and his family moved to Park City, Utah, in 2004 to start their new business, and they began distilling in 2007. David's passion of the Old West and Utah's little-known whiskey history led them to Park City. High West started tiny, with a 250-gallon still and tavern housed in a historic livery stable and garage. What began as a small enterprise in downtown Park City has evolved into a globally renowned brand with four distinct sites. High West launched their distillery in Wanship, Utah, in 2015, which houses a 1600-gallon copper pot still and serves as a location for instructional whiskey tastings, pairings, and tours. Meanwhile, the Saloon remains a must-see gastro-distillery, serving alpine-inspired western fare alongside the original still, the Nelson Cottage serves unique whiskey-paired dinners, and the Saloon at the Salt Lake City airport gives some last tastes of the Wild West on the way out.

Be the first to review “High West Bourye Whiskey” Cancel reply
Get this product Pickup available at 5790 Broadway, Bronx, NY 10463
Get this item delivered via FedEx. Learn more.