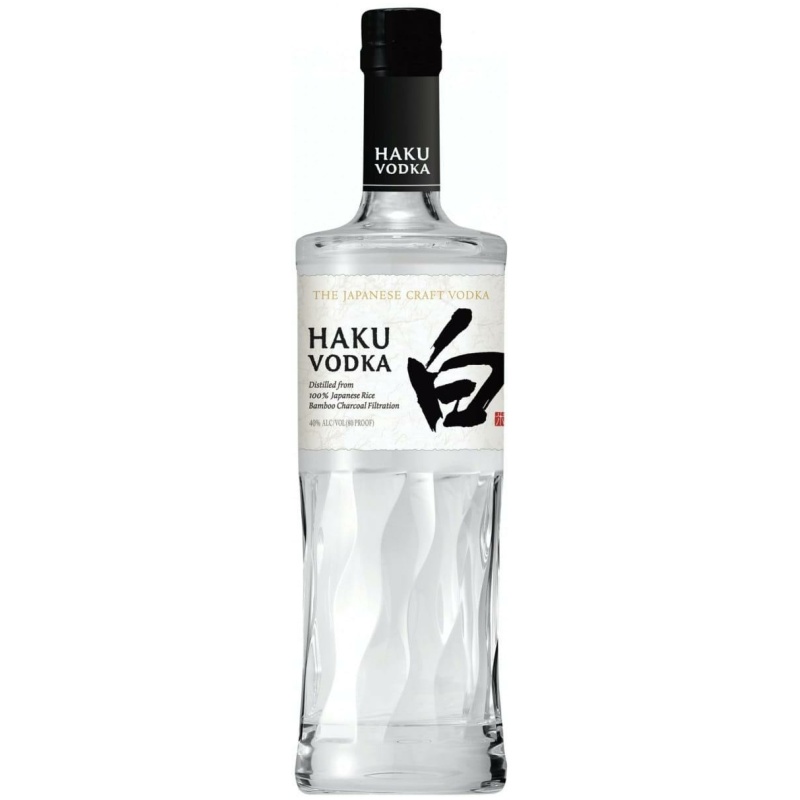 Suntory Haku vodka is unrivaled in terms of softness, roundness, and subtle sweetness.

Nose: A subtle, sweet floral aroma of rice dominates the nose.
Palate: A full-bodied flavor that gradually envelops the mouth with the rice’s natural sweetness and complexity.

The bamboo charcoal filtration process results in a silky finish with a subtle, pleasantly lasting sweetness.

Haku means “white” in Japanese and is made with 100 percent Japanese white rice. The word can alternatively be read as “bright,” a nod to the skill involved in creating a clear, clean, and luminous vodka. Suntory Haku vodka, which is filtered using bamboo charcoal, has an unrivaled delicate, round, and subtly sweet flavor.

Haku is a name that honors the origins and craftsmanship of this Premium Japanese Vodka. Hakukanji’s (Japanese character) means “white.” However, the intricacy of the Japanese language allows characters to have multiple meanings. When read as “shiro,” it simply means “white.” When interpreted as “haku,” however, it is firmly anchored and exalted.

The origin of the liquid is referred to as “Hakumai” () – Japanese white rice. Elevated as inspiring “Junpaku” (“untainted”) and brilliant – a tribute to the art of perfecting a clear, pure, and luminous vodka, meticulously filtered through bamboo charcoal for an unmatched smooth, round, and gently sweet taste.

The product design combines a traditional Japanese elegance with an ever-evolving modernity. We employ Japanese materials with a touch of artisanal excellence to represent it as a Japanese Craft Vodka — simple and pure. We symbolize the stream shining through Japanese nature and Japan’s four seasons through the curving lines on the bottle.

The label is made of Junpaku (pure-white) washi paper, which symbolizes the beauty of Japanese white rice, which is the vodka’s essence, and Kanji calligraphy “Haku” written in sumi ink, with only red and gold hues. The end result is a clean, modern Japanese style that is devoid of superfluous frills.

Suntory’s craftspeople are dedicated to selecting the best ingredients and developing complicated and creative production procedures in order to make spirits of unsurpassed quality and distinct Japanese character. The House of Suntory’s “Monozokuri” workmanship is known for it. Haku is the next version of that idea, carrying on Shinjiro Torii’s vision of challenge and pursuit of greatness. Haku is a specialty vodka made in Japan.

Japanese white rice has never been regarded a “staple” of a Japanese meal, contrary to popular belief in the West. Pure white Japanese rice is still considered a luxury item today. White Japanese rice was traditionally designated for religious purposes and the wealthy noble classes, including the Imperial Family.

White rice is prized for its mild, delicately sweet flavor once it has been milled and polished to perfection. The greatest icon of Japan is pure white Japanese rice. It honestly expresses Suntory’s devotion to using only the best and most authentic Japanese ingredients.

About the Producer: House of Suntory

The House of Suntory, founded in 1899, was founded on a single man's ambition. Shinjiro Torii intended to "produce an original Japanese spirits gifted with the treasures of Japanese nature and'monozukuri' craftsmanship: a tireless desire for perfection, precise attention to detail, and devotion to quality" when he was 20 years old. Shinjiro battled adversity after overcoming adversity to realize his objective, inventing wine, whisky, and brandy before launching Hermes Vodka, the first Suntory Vodka, in 1956. Shinjiro and his family have consistently pursued their mission with the same tenacious energy, employing the "yatte minahare" (go for it) philosophy to defy market conventions and introduce world-class spirits.