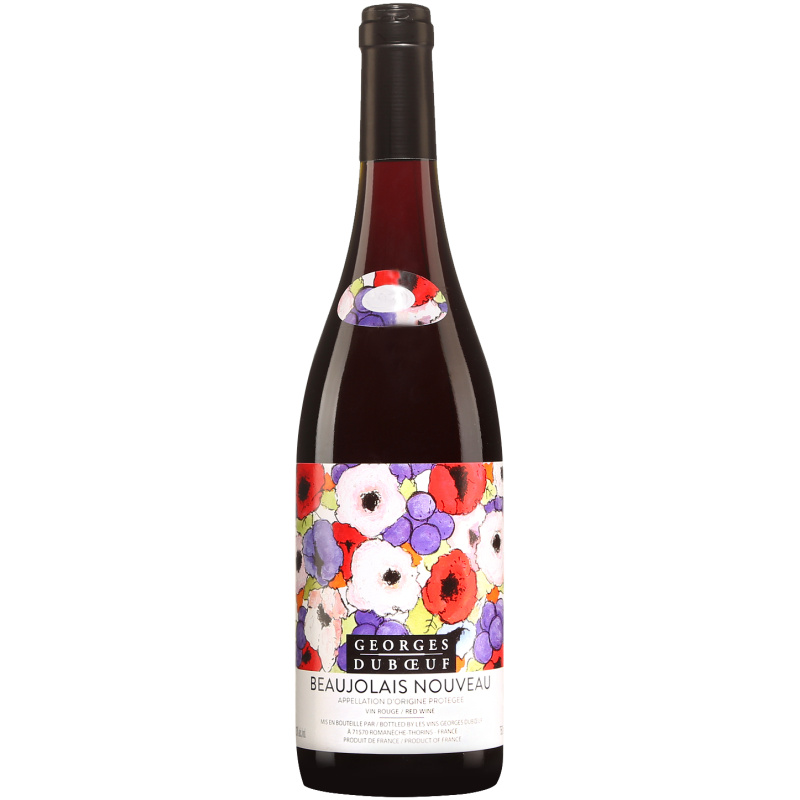 Looking for a Georges Duboeuf Beaujolais Nouveau and want it delivered to your door? You’ve come to the right store. We offer fast delivery with FedEx on all our products.

About the Producer: Georges Duboeuf

Georges Dubeuf is one of the largest and most famous winemaking and ongocyante companies in France. Its founder, Georges Dubeuf himself, grew up in the Macon region of Burgundy, although the brand is strongly associated with Beaujolais in the south. Dubouf is credited with single-handedly making Beaujolais an internationally recognized wine region by promoting Beaujolais Nouveau in the 1980s and 1990s. Duboeuf, a company (better known as Les Vins Georges Duboeuf) produces nearly three million cases of wine a year (just under 30 million bottles), a fifth of which is exclusively for the young and easy-drinking Beaujolais Nouveau. The wine is released in November after the same year's harvest - two to three months after the grape harvest. For both Art Nouveau and more standard Beaujolais, Dubeuf harvests grapes from across the region, including some of the cru villages: Bruilly, Fleury, Moulin-a-Vent and Saint-Amour, to name just a few. The dominant grape variety here is Gamay, as well as Chardonnay for white wines. The property works with around 300 producers in the Beaujolais region alone to guarantee the quality of the fruit. The production is supervised by the son of Franck Dubeuf, considered one of the main experts of Beaujolais, its terroir and wine. In general, the company divides the wines produced into two segments: real estate wines produced under the Duboeuf brand; and wines produced in domains under their own brands (although they are part of the company's portfolio). The company owns vineyards and wineries in Beaujolais, Macon, and also under the generic names Bourgogne and Vin de Pays - IGP. The winery produces many other varieties, from Pinot Noir and Chardonnay to Grenache, Syrah, Merlot and Sauvignon Blanc. ... He even produces the very new and world-sounding Patchblock brand of Pays d'Oc. A scandal surrounded the Duboeuf winery in Beaujolais in the early 2000s after it was discovered that wines of different varieties were mixed and bottled with misleading labels. The company was found guilty and fined. Dubeuf argued that none of the wines involved were marketed and that the blend was wrong. Georges Dubeuf himself died in 2020.