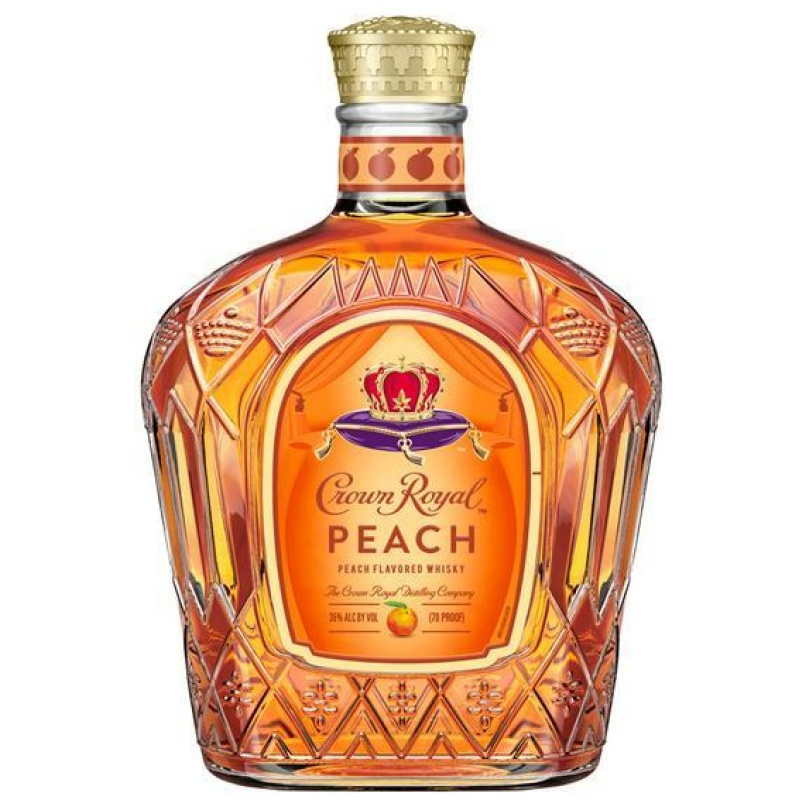 Unwind in luxury with a glass of Crown Royal Peach Flavored Whisky. To create this extraordinary blend, fresh Georgia peaches are harvested, de-stoned, pressed and strained to preserve their bright, aromatic taste. Then, our master blender infuses the juicy flavor for a vibrant and delicious whisky with luscious notes of creamy vanilla and a decadently sweet finish. Made with the signature smoothness of traditional Crown Royal, our peach flavored whisky will enhance a cozy cocktail party or rooftop celebration. Enjoy our whisky mixed with iced tea for a refreshing tasting cocktail. First created in 1939 as a gift for the king and queen of England, a Canadian entrepreneur created a blend of 50 whiskies and wrapped a bottle in a regal purple bag with gold stitching. Affectionately named “Crown Royal,” our whisky maintains the integrity and quality of our process today as it was first presented to English royalty. Blended with 50 distinct whiskies, Crown Royal assures decadence in every bottle of our signature whiskies. Please drink responsibly.

The whiskey known as “Crown Royal” – is a drink created by Seagram’s to a specific event and he became an event. The arrival in 1939, the English monarch George VI in Canada spodvig wine masters in the creation of this masterpiece. It includes about 50 varieties of the best whiskey of different degrees of exposure. Numerous attempts to build eventually culminated in the creation of unique, excellent drink, duly assessed not only by the king. In the production of whiskey master adhere to the highest standards: crushed rye and malted barley distilled, the distillate is kept in barrels of secondary use of white American oak to achieve the desired fortress and soft luxurious taste.

Issue on the world market “Crown Royal” took place only in 1964, when its production could reach mass production. Runaway success secured the whiskey called “legendary drink of Canada”, and today the number of sold bottles is now around 25 million. Packaging design is worthy of special mention and admiration: the bottle in the form of cut diamond with a lid in the shape of a crown placed on the cover of blue velvet, reminiscent of the royal mantle. This crowned whiskey rightly occupies a special privileged position among all the drinks category.
Whiskey “Crown Royal” won four gold medals at the international competition “San Francisco World Spirits Competition” in 2005, 2006, 2007 and 2010.

Seagram’s company began its history in 1857 with a factory opened in g.Vaterloo, Ontario. Its founders were Sam Bronfman and Joseph Seagram. During Prohibition in Canada Seagram’s products are sent by mail, and when Prohibition began to act in America, the transportation of products smuggled into its territory. Seagram’s production capacity was used to create a large supply of alcoholic beverages in 1933, when Prohibition was repealed, it was he who allowed the company to fly with lightning speed in terms of sales, purchase a few new plants and put together a vast fortune. After that, the company up to the 90s was at the top. One of its characters became famous skyscraper Seagram’s in New York.

In 1981, the heirs of the Bronfman decided to expand the scope of business and absorb one of the leading oil and gas corporate America – Conoco Inc. Do not calculate the forces, fight Seagram’s lost without losing at the same time its financial resources, and even expanded its structure to obtain a controlling stake in chemical giant Dupount. In the 90’s the star of the advertising company Seagram’s was the actor Bruce Willis. The main mistake of the company’s management was the decision to do the film and media business by acquiring several well-known companies through the sale of its most profitable enterprise Dupount. This new kind of business absorbs all profits derived from the sale of beverages. This led to the fact that in the early 2000s, the media group was taken over by the company Vivendi, line soft drinks – to Coca Cola Inc, and the production of alcoholic beverages – to Diageo.