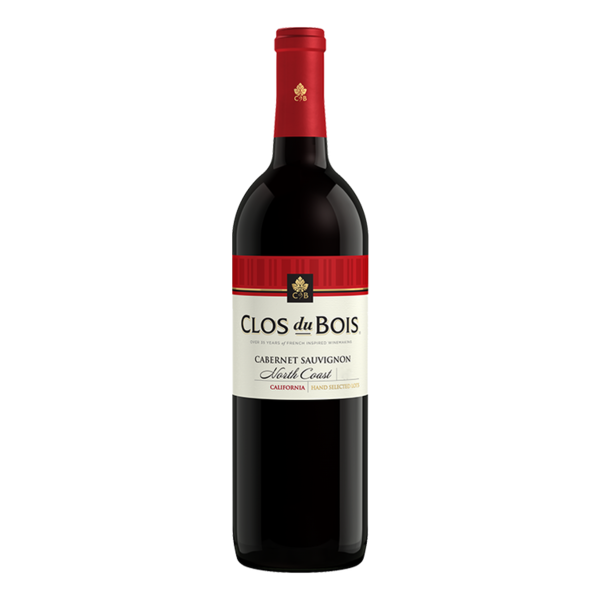 Get this Clos Du Bois Cabernet delivered to your door. Clos Du Bois Cabernet color is a deep dark red with a violet ring. Deep cherry, sour cherry, and berry aromas typical of Amarone della Valpolicella, as well as spice and dried fruit notes typical of Valpantena. Tannins are present in the mouth, even if they are soft and covered in glycerin and a red fruit flavor.

About the Producer: Clos du Bois

Clos du Bois is a Californian producer located in Sonoma County, intimately associated with the history and development of Sonoma's wine industry. It was founded in 1974 by Frank Woods and the first commercial wines were produced by Chardonnay and Pinot Noir. Clos du Bois now has a large portfolio and produces over a million cases a year. The company's assortment includes wines of different price ranges, but mostly they are made from common California and Sonome varieties - Cabernet Sauvignon, Zinfandel, Merlot, Pinot Noir, Chardonnay and Sauvignon Blanc. In 1978, Clos du Bois introduced the first Bordeaux-style red Sonoma blend, while Frank Woods also played a significant role in popularizing vineyard names and designations on California labels rather than brands. new winery, just over 210 hectares (520 acres). Throughout its history, it has been an advocate of sustainable ​​green vines. The winery has more than 4,000 solar panels that supply almost all of its energy needs. Woods sold the winery in 1988, which eventually led to its purchase by beverage giant Constellation Brands Inc. Gallo in a deal approved in January 2021.