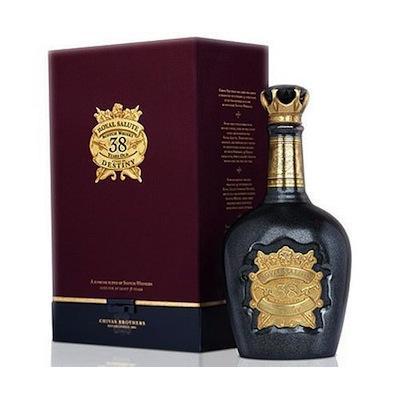 Discover the popular Chivas Royal Salute 38Yr Blend and have it delivered to your door today.

About the Producer: Royal Salute

Royal Salute is a luxury Scottish whiskey brand founded to commemorate the coronation of Queen Elizabeth II in 1953. It is produced in Speyside, Scotland, by the Chivas brothers at Strathisla Distillery, which is one of the oldest operating companies. distilleries in the world. Royal Salute is unique in that the younger expression on the label is aged for at least 21 years, creating a soft and luxurious whiskey. The name comes from the traditional 21-shot salute, which is recognized worldwide as the highest military award. The brand has a vast collection of whiskeys with different blends, ages, production technologies and choices, created in honor of several brands. reasons. For example, Pedro Ximénez Sherry Cask Finish uses casks of sherry brought in from Spain for the aging process, while a Chinese New Year special is released every year for the occasion, blended for Chinese flavor. Classic Blends is the company's flagship collection of three whiskeys: Signature Blend, Malts Blend and Lost Blend. Signature Blend was the first to be released by the company in 1953. It evolved into a long-lasting whiskey due to its popularity and the fact that it had remained unchanged for nearly 70 years. The brand currently belongs to the multinational beverage conglomerate Pernod Ricard.