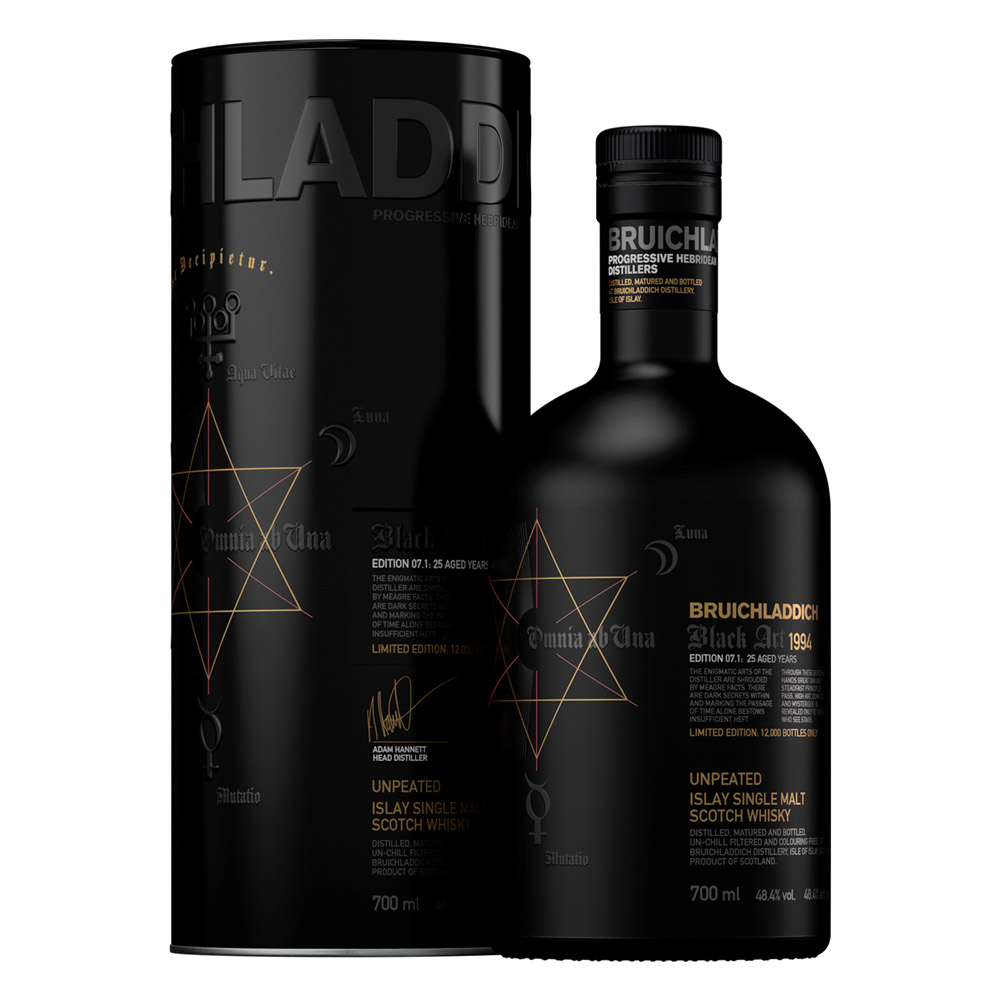 The fifth iteration of this now-legendary Bruichladdich Black Art single malt comes from head distiller Adam Hannett for the first time. The composition of casks is as opaque as it has always been. Black Art is Head Distiller Adam Hannett’s personal journey into the heart of Bruichladdich, working with the best American and French oak to discover that most esoteric link between spirit and wood. We believe in the artisan’s soul.

Character – This alchemical expression is the best of our cellars and soul, and it’s been years in the making. It took a lot of sleepless evenings to put together.

Nose — Deciphering the whole range of sensory delights on offer takes time. As you tear the threads apart with your hand, you’ll discover sumptuous fruit notes of cherry, mango, apricot, damson, and a warming orange citrus, all wrapped in an oak blanket of soft brown sugar, vanilla, and syrup-dipped figs. As the continual evolution of flavor hints at the depth and secret complexity of this dram, different notes will emerge each time you return to the glass.

Palate – The whisky has an elegance with which it lays on your palate; a black velvet quality that comes from the spirit’s age, along with the pedigree of casks to give you a mouthfeel unlike any other. The decadent expression of magnificent wood’s impact is the never-ending outpouring of fruit. Damson, mango, pineapple, melon strawberry, plum, and apricot are detected on the nose. They weave in and out of focus on your palate one after the other, while the oak structure provides honey, tobacco, vanilla, and undertones of spicy cinnamon. As smooth and elegant a dram as you’ll find.

Finish – the actual DNA of Bruichladdich spirit emerges through. With a wonderful blend of oak, malt, and fruit, this beer is a joy with light stone fruits and a cream texture. A soft floral mellowness comes in as the flavors fade, leaving a lasting memory.

Mood – As I walked through the gloomy warehouses in search of inspiration for my debut edition of Black Art, I reflected on the teachings I’d learnt from the great distiller. In every way, getting to this point has been a spiritual journey for me.

“Just before Master Distiller Jim McEwan retired in 2015, he pulled me aside and delivered me his recipe for Black Art 5, the next iteration. The turning over of responsibility for one of the biggest drams we’ve ever created was an emotional time. I have to admit that I took Jim’s recipe and dutifully ignored it. “This had to be my Black Art,” — Head Distiller Adam Hannett

Be the first to review “Bruichladdich Black Art 7Yr” Cancel reply
Get this product Pickup available at 5790 Broadway, Bronx, NY 10463
Get this item delivered via FedEx. Learn more.