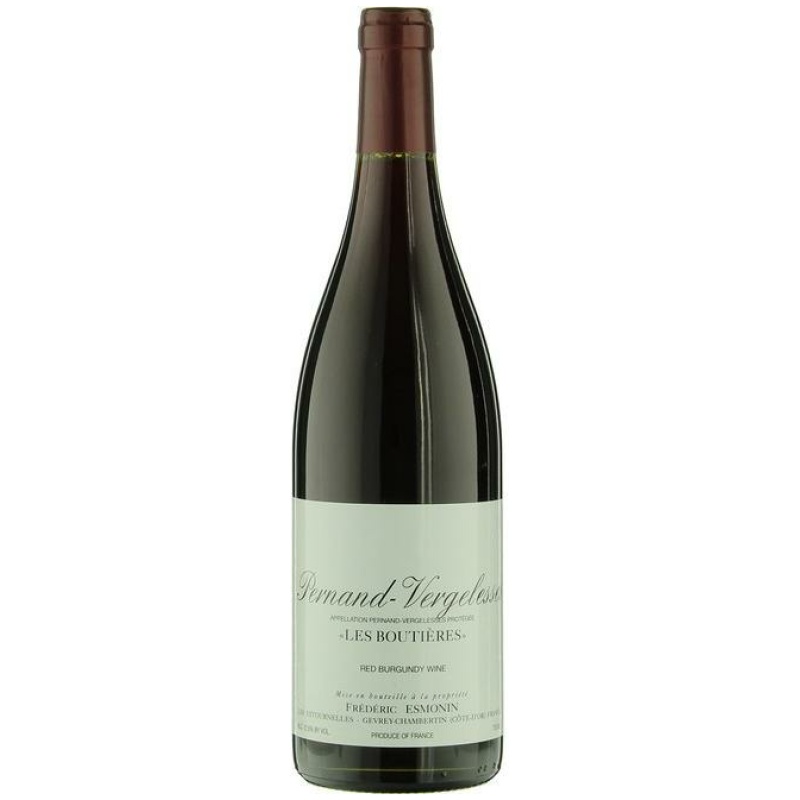 Frederic Esmonin, Pernand-Vergelesses “Les Boutieres” – a very soft and very fresh red wine with characteristic mint, earthy and fruity notes in taste and aroma. The wine is made from Pinot Noir from the organic vineyard “Le Butière”. The age of the vines in the vineyard ranges from 25 to 45 years. After cold maceration and fermentation, the wine is aged in oak barrels of different ages and different degrees of roasting for 12-16 months. The wine can be consumed young or stored for about 10 years.

More than 80% of the people in the world have heard of Burgundy since it is the name of a wine region in France, but most of us are familiar with the word since we call the popular red and white wine that the region produces Burgundy. These wines are believed to be among the best money can buy, which is why they're some of the most costly in the world. We are about to state the reasons why so many people feel this way, and before we do, we are going to give a quick overview of red and white Burgundy.

Red Burgundy is a wine that is created in the Burgundy area of eastern France using Pinot Noir grapes that are all from one vineyard. As a matter of fact, red Burgundy is a Pinot Noir, just like any other red wine. Burgundy wine, sometimes known as ""white Burgundy,"" is manufactured in Burgundy, but, as it is white, it is created with 100% Chardonnay grapes. That's all there is. Nothing too difficult, is it?

The uniqueness of Burgundy lies in its great effect on the vines; in particular, Burgundy is a microcosm of terroir, one of the few wine regions in the world that is fully impacted by its terroir. Terroir is a feeling of place, and it implies that when you drink a wine, you're able to thoroughly taste the location where the wine was created. Terroir, or the idea that the land from which the grapes are produced gives a distinctive characteristic that is distinctive to that single vineyard, is most simply described as the land's ability to influence the grapes' flavor.

About the Producer: Frederic Esmonin

Frédéric Esmonin is a Burgundian property located in the Côte de Nuits area. The domain has two Grand Cru vineyards in Gevrey-Chambertin, planted between 1949 and 1959 - Mazy and Ruchotte-Chambertin, as well as three first-class climates - Champont, Lavaux Saint-Jacques and Estornel-Saint-Jacques. The one-hectare (9-acre) house was founded by André Esmonen in the 1970s. Frederik Esmonen, cousin of domain co-owner Sylvi Esmonen, joined his father in running the family business in 1988 and, in the same year, the domain began to bottle and sell its wines entirely on its own. At the same time, Frederic Esmonen founded the non-state brand Les Estornelles, which ages its wines in wooden barrels for 14 to 17 months. Typically, Grand Cru and Lavaux Saint-Jacques Premier Cru wines are 80% new oak, while national-grade wines age 20% in new oak. Racks are only produced when the wine is ready for bottling (without filtration). The Mazis-Chambertin Grand Cru vineyard is on firm ground, while the Ruchotte-Chambertin vineyard is on lighter ground. Frederic Esmonin's Premier Cru Lavaux Saint-Jacques vineyards are located near the most revered Premier Cru climate in Gevrey-Chambertin - Clos Saint-Jacques. These vines are planted in clayey soils with southeast exposure. Frederic Esmonen also produces three country wines: Clos Prieur, a vielles vignes and a country.