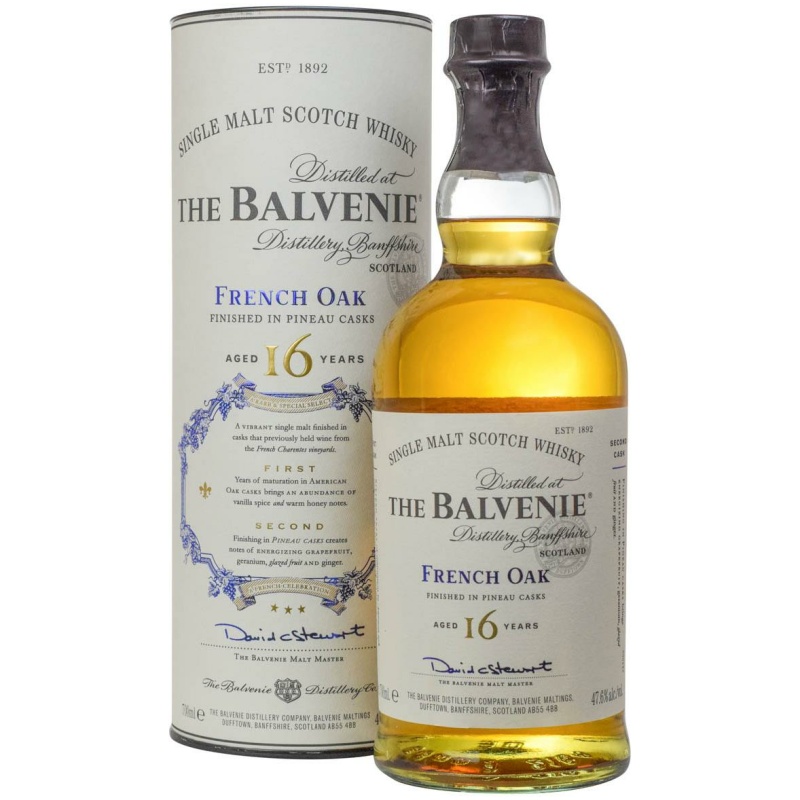 Discover the popular Balvenie 16Yr French Oak Pineau Cask Finish and have it delivered to your door today. The 16-year-old Balvenie French Oak single malt Scotch whiskey has warm honey overtones and is a lively, invigorating expression that was completed in barrels that had previously contained French Charentes vineyard wine. The Balvenie French Oak is finished in Pineau casks, which produce notes of stimulating citrus, geranium, glazed fruit, and ginger. The Balvenie French Oak is first aged for 16 years in American oak casks, which add a wealth of vanilla spice and warm honey overtones. The flavor is best when consumed neat, on the rocks, or with a dash of water. The Balvenie is devoted to the five unique crafts that go into producing its particular flavor. The Balvenie is one of the most handcrafted of malts because it is the only distillery that continues to produce its own barley, use traditional floor maltings, and keep both coopers and coppersmiths on site. The Balvenie is a distinctive line of single malt whiskey made in the Speyside region of Scotland’s Dufftown. Each of the variations in the line, which was developed by the renowned malt master David C. Stewart MBE, has its own individual flavor while yet retaining The Balvenie’s identifiable overtones of richness, smoothness, and honeyed flavor. It has won prizes at many international competitions, including the 2019 International Wine & Spirit Competition’s Outstanding Achievement in The Scotch Whisky Industry Award for David C. Stewart MBE. Handcrafted for responsible enjoyment.