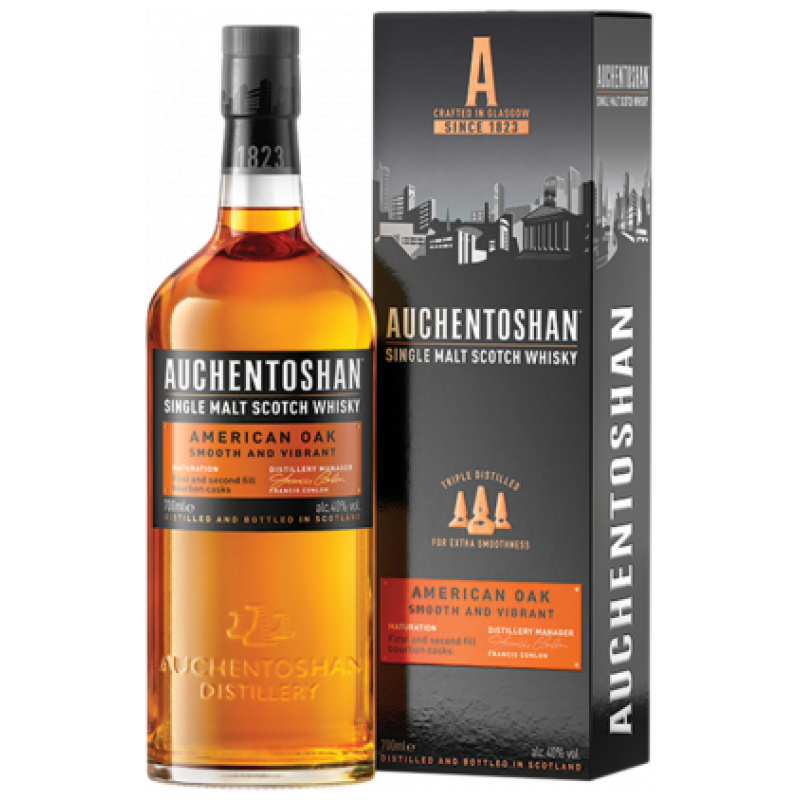 Looking for a Auchentoshan Scotch Oak and want it delivered to your door? You’ve come to the right store. We offer fast delivery with FedEx on all our products.

About the Producer: Auchentoshan Distillery

Auchentoshan Distillery is a Scottish Lowland whiskey producer and the only producer in Scotland to produce whiskey using triple distillation. Auchentoshan's history dates back to 1817, when John Bullock built the Lowland Duntocher distillery on the banks of the River Clyde. Unfortunately, right after the bankruptcy, Bullock had to sell the distillery, which went to John Hart and Alexander Filshey. After acquiring Duntocher, the couple decided to change their name to Auchintoshan (sic). During World War II, the distillery was heavily bombed on the 1941 Clyde Blitz, which severely damaged the warehouse and dumped the burning whiskey into the river. Today, the distillery is owned by Beam Suntory. The production process of single malt Scotch whiskey in Auchentoshan starts with unrefined malted barley. Fermentation takes place in Oregon pine deposits, and the fermented liquid undergoes triple distillation before aging in oak barrels. The Auchentoshan range includes 12, 18 and 21 year old American oak and the latest addition, Three Wood. The name Three Wood is due to the fact that it matures in three different barrels: American bourbon, then Spanish Oloroso sherry, and finally Pedro Jimenez barrels. The distillery also produces limited-edition whiskeys, including vintages from 1957, as well as a number of travel retail sales.