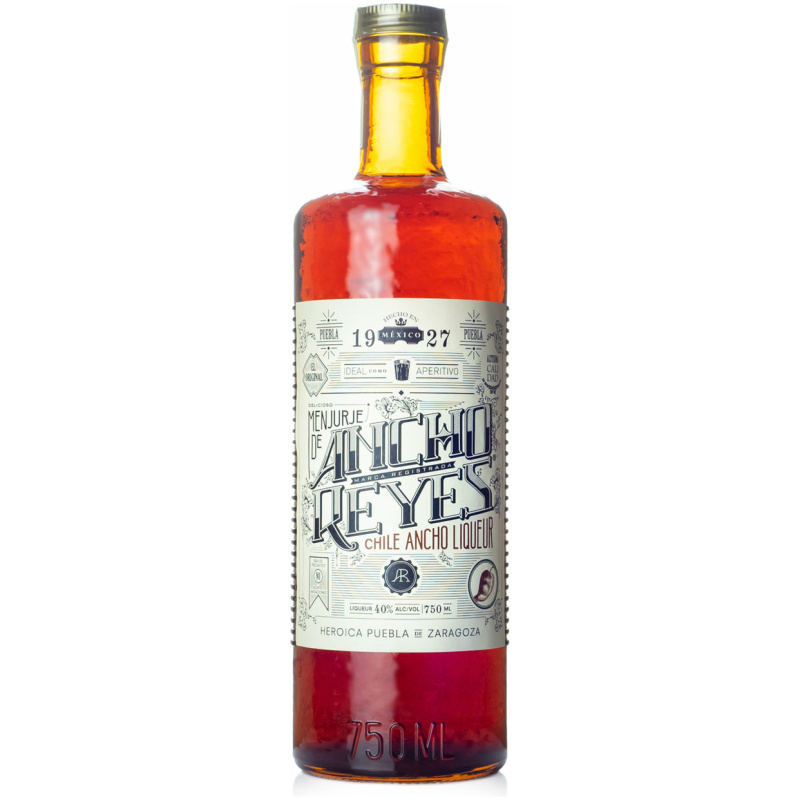 Ancho Reyes is the original Chile liqueur, a unique blend of the heat, sweetness, smoke, and spice of the chile Ancho that predates all other spicy liqueurs by about a century. It was born of a cultural revolution in Puebla in the 1920s. Ancho Reyes conjures a sense of nostalgia through evoking a sense of timelessness. Get this Ancho Reyes delivered to your door in NYC or further today from Broadway Wine N Liquor.

This liqueur’s adaptability allows it to be savored alone or blended, as an aperitif or digestive, at any time, station, or region.

Ancho Reyes and Ancho Reyes Verde are made by hand with Puebla chilies. We use time-honored menjurje-making processes perfected by artisans in Puebla in the 1920s. Poblano chilies are grown in Puebla’s volcanically enhanced soils. After harvest, the soil is allowed to rest for three years before being used to grow chiles again. After that, each poblano chile is hand-selected for quality one by one. The chiles for Ancho Reyes Verde are plucked when still green. The chiles for Ancho Reyes Original are collected when they’ve ripened and turned red.

The chilies are macerated in small vats of neutral cane spirit from Veracruz, Mexico, for half a year in a stepwise procedure. The resulting liquid, which is infused with chile taste, is then hand-blended by our Maestra Maceradora – or Master Blender – to ensure consistency in flavor and spice. The combination sits for a while, letting the tastes to meld nicely.

The liquid is then bottled once it is ready. Each bottle is meticulously inspected before being hand-labeled in the traditional manner.

Spicy spirits are notoriously difficult to pull off since not everyone enjoys the same level of heat. It’s also tough to capture the spirit of a fiery chili pepper without sounding fake. Several products, such Southern Comfort Fiery Pepper, Stoli Hot & Sticki, and even Absolut Peppar, have attempted to tackle the spicy spirit challenge, but none have succeeded in capturing a pure and natural pepper flavor that is still delightful to consume.

“Inspired by a 1920s vintage recipe unearthed in the municipality of Puebla de Zaragoza,” William Grant’s Menjurje de Ancho Reyes is an aperitivo supposed to be consumed neat, but clearly geared at the artisan cocktail market. It’s an odd territory for William Grant to enter, but it’s not surprising given that they distribute Milagro Tequila and Montelobos Mezcal, and hot pepper pairs well with tequila’s natural vegetal spiciness.

Menjurje de Ancho Reyes Chile Liqueur (40 percent ABV / 80 Proof) — Ancho Reyes has a beautiful aroma of roasted ancho chiles on the nose. The nose picks up on the roasted chile flavor as well as a hot pepper that is slightly green and vegetal. Cinnamon and sweet honey are hidden beneath the pepper. In the nose, the balance is sweet rather than spicy. Ancho Reyes’ introduction is similarly quite sweet, with rich honey aromas leading the way. Honey is still present, but roasted ancho chili, solid cinnamon, and dark chocolate have joined it. Ancho Reyes doesn’t get particularly fiery until the end of the midpalate. It’s a lovely crisp spice that cuts through the sweetness of the dish. On the palate, the hot pepper heat lingers for a long time. It’s a little spicy, but not too much.

90
Wine Enthusiast
Ancho Reyes is smooth, sweet capsicum nose; silky and lush with ancho chile that adds a good measure of heat; a dense and rich liqueur based on a 1927 recipe.

These sweet distilled liquids are frequently referred to as cordial or liqueur interchangeably. In the realm of drinks, however, cordial has a few different meanings:  Cordial is a term for the sweetest, most dessert-like distilled liquor. For example, you may see "cordial" on the labels of chocolate or cream spirits.   nonalcoholic, syrupy drink, such as lime cordial or elderflower cordial, is referred to as a cordial. It is more often used in the United Kingdom. Cordial was originally used to describe a sweet medical tonic that was very pleasant to drink.

About the Producer: Ancho Reyes

In the 1920s, the cantinas of Puebla's Barrio del Artista were bustling with artists and intellectuals who convened to debate ideas over homemade liqueurs known as menjurjes, which were created by local artisans. One very popular menjurje was made by hand using ancho chile, which is a type of chili. A tribute to those original recipes is paid by Ancho Reyes with the introduction of Ancho Reyes Original and Ancho Reyes Verde, two authentic Mexican liqueurs rooted in the history of Puebla.